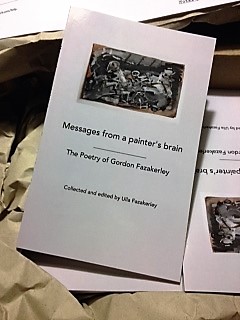 From a painter’s brain

Gordon wrote poems all through his life even though he claimed he left them behind to concentrate on painting in an article in the Danish art magazine Spektrum in 1989:

“Where words break up fall apart, or better still, turn transparent, is where a painter can begin. But watch your step! This is the place where words  perish and nothing can be. I have let my poems disappear into my painting, a deliberate decision, basically they were messages from a painter’s brain, their destination the soundless. “The soundlessness of painting” – a glimpse into the meditative dialectic”

In 2016 some of his poems found by his wife in cupbords and cardboard boxes and scribbled down on notepaper and newspapers, were published in “Messages from a painter’s brain” Here’s one:

dared not further for getting

The small collection of poems can be puchased by writing to susanfazakerley@gmail.com, but you can also see a few more on this website in the section poems.