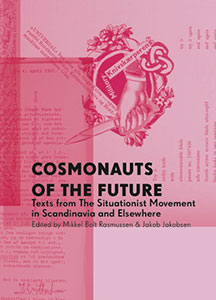 Cosmonauts of the future

The anthology covers over three decades of writing, from Asger Jorn’s “Luck and Chance” published in 1953, to the statements of the Situationist Antinational set up by Jens Jørgen Thorsen and J.V. Martin in 1974. The writings collected gravitate around the year 1962 when the Situationist movement went through it’s most dynamic and critical moments, and the disagreements about the relationship between art and politics came to a culmination, resulting in exclusions and the split of the Situationist International.

Cosmonauts of the Future is edited by Mikkel Bolt Rasmussen and published by Nebula in associaiton with Autonomedia and can be purchased and downloaded www.nebulabooks.dk