Extracts from “Cosmonauts of the future”

Cosmonauts of the Future: Texts from the Situationist Movement in Scandinavia and Elsewhere is the first ever English-language anthology collecting texts and documents from the still little-known Scandinavian part of the Situationist movement. The anthology that was published in 2015 by Nebula in association with Automedia is edited by Mikkel Bolt Rasmussen and Jakob Jakobsen and retains three texts/poems/reflections by Gordon, you can read below, as well as some manifestos that Gordon contributed to.

The anthology can be dowloaded and purchased from http://nebulabooks.dk/ 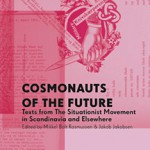 Farewell! Thou art too dear for my possessing,

To hell with you and your capitalising from politics. You who have tattooed whoredom with sunflowers. Ambassadors, in outworn myths and contemporary alibis. Whose conscience is a sleeping sickness that is an evergreen. Yes we know what the crumbs contained that they threw to you, so you would emit from under the Ostrich wings of the American Embassies. They paid you with dictatorship of a culture. The so-called Democratic Culture, what a democratic fallacy this culture, what a paranoic holiday. What an anti-climax to the human enterprise of Hart Crain, Jackson Pollock, Dylan Thomas, James Dean and the dying Jack Kerouac. What a deficiency of Integrity, on the part of the politician and the artist. What a way for a poet, a painter to gain creative recognition by embalming their bodies for posteriority.

To the nauseating Royal Danish Porcelain, to wonderful Copenhagen and its German officers, to the Louisiana museum of modern cheese, near the grave of Hamlet, arranged as a service for the tourist industry. To the Carlsberg Beer Foundation for bad art and the pseudoavantgarde art magazine Signum. Now it is that we understand Bill Shakespeare’s words that, ‘there is something rotten in the state of Denmark’.

To the cockoo Eliot at the top of Faber and Faber Chestnut tree, to BBC, the British Council, the Establishment, Made in England, to the Tory, Labour, and Liberal party, the garden party, the cocktail party, and to every political party in the world I say: Fuck off! Gordon Fazakerley Fuck Off!

We are free men and free exiles, here in the hills of Hallandsåsen, in a free country, which is not a member of NATO or any other military block or atomic werewolf pack that threatens innocent people.

Perhaps it was the dove of peace, we don’t know – it was not made by Picasso or burnt by little Tinguely, but we found an olive leaf in the beak of a dove.

gift of the gab blab blab.

Blab to the centre.

Blab to the right.

Blab to the left.

nothing to blab, nothing which to blab

no power to blab, no desire to blab

no obligation to blab blab.

All together blabber International blab blab

We all want Christmas… which is as good an example as can be given to illustrate the necessity of cultus. The Labyrinth Project is designed not ex – clusively as a feeding of the cultus necessity, but also as a way of getting rid of the world of the forgeries, the churches, the temples, etc. The labyrinth is the human condition, it is also the estate of man, so what better direc – tion to take towards Utopia in a global sense than by the construction in every town and city of a labyrinth. With the completion of the Labyrinth Program the whole machinery of cultus manipulation by religions, politics and states can be destroyed but cultus will remain. The necessity of the Labyrinth Program cannot be more urgent, than it is today, for as the ma – chinery of the modern state propels us towards the ultimate in authority, which will be the corrupting of the whole mass that shall exceed private resources of wealth.

The idea of the proletariat as a moral re-generator has filled society with revulsion. The bourgeoisie would not tolerate the existence of a body of people who endangered their mediocrity. The bourgeoisie then drew themselves over the proletariat, creating themselves, the bourgeoisie into an ocean, an ocean of shit, that suffocated all that was not filled with their mystic vision of mediocrity. A vision that fills me with revulsion. The last proletarian is the artist, and he stands alone, even the traditional bohemian life around the artist is gone. The Labyrinth Project has been designed to create in this negative situation a positive step towards an orientated milieu.

In discussions with friends we have often talked of the failure of the revolution of the left, and the stealing of the revolution of the left by the right. But the idea of a new left, which is the left of the left, a new Bolshevism, is a sentimental revivalist mentality, which by its fragmental nature can only create a quasi-bible kind of sect or at most quasi-bibletype-belts. The left of the left proclaim that ‘all that is against the society is good’, but they fail to recognize, that for example, a teddy boy who reacts, is reacting against having nothing or not knowing what to react against. A reaction is better than no reaction. But after he has reacted he literally returns to the society, and the ocean of shit swells with a new member. But of course I will not criticize all of that which the left of the left have attacked, there is very much good in their attacks, and I stand in agreement for example with their attack on the Mathieu mentality in art. For it was Mathieu that gave direction to the bourgeoisie program, to draw the artist into their ocean of shit.

The result of the program can be seen in the ‘happenings’ where art has been cleaned up, and is Mahler-frei, artist-free.

The Labyrinth as a prelude or utopia, is by its very nature ‘chaos and cultus’ perhaps just that very mixture which shall destroy the congealed and established and the multi-acceptance of it. It can be the first positive blow struck at the paranoiac apparatus of the survival mentality of the political machinery.

(Survival is the new whip of the political-machine). To be sure, the schizophrenic machinery of the modern state, the machinery that rules now without the control of man, making a statist paradise of fragments, can be stopped. For we are each a labyrinth unto ourselves as indeed humanity is a labyrinth.

The program is faced with dangers, which are mostly distortions and crap, for the labyrinth is nothing new. The recent tragedy of pop art which was a distortion of the popular arts and their importance by the rightwing public-relation apparatus of the global academician of such bourgeoisie organs as Art International, Cimaise, etc. (1) will perhaps remind you. Events such as the Stedelijk Museum labyrinth which was just crap, also the capitalists have taken over where Hitler did not complete with supermarkets. To be sure, in behalf of the society the capitalists take and use, then leave it to the machinery of the modern state to fragment and kill. In my lifetime existentialism has been killed, jazz has been killed, and popular arts are in the process of being killed, they are all being killed by the kunst-art-industry with its pop-art, which is the first popular art that was ever signed.

The intention of the labyrinth is to act as an anti-bible. For it was with the Bible that man first surrendered his will, surrendering his will to a book of words. With the labyrinth it is hoped to reverse this tyrannical situation and give man his will back again. A few notes on the program. – A labyrinth to be built for every 10,000 people in cities and towns. – To be sited at first on all possible future sites of community centres, as the labyrinths establish, it can then move in to the old centres. – Of course if Roman Catholics carry on not using French letters, the populations of these areas will make it so that they are one great labyrinth and the churches will be lost behind the corners. – As the population stands in China, it will end up as one great labyrinth. Christmas 1962

(1) The magazines I mention here seem to have a complex against the poets who work with and popularize the painter’s work. The painter is now expected to exchange the poet for a public relations officer, how decadent can it get? In this society the only way a poet can exist as a poet is with the painter. The poet is real, even if society cannot give a poem a money value on the stockmarket. The poet and painter have one thing in common, that no public relations officers can dispel: each can take his penis out and make art with it. And what critics on the face of the earth would dare to expose themselves, and let their penis speak.